What you need to know

Manually build a Jenkins Pipeline job at least once, if you’ve set up the job to build automatically when a change is pushed to an SCM like Git. I scratched my head for some time about this, checking logs and double-checking configurations before I figured out why. The short answer: RTFM.

Now that everyone’s using continuous integration (CI) a logical move is to apply CI principles to software build automation, not only to source code. The Jenkins Pipeline job was introduced a couple of years ago, and defines a job entirely in Groovy script. There’s an option to include the job definition as a file, Jenkinsfile, in a source code repository; then a change to Jenkinsfile (not only code files) in the repository can trigger a new build.

From the available build triggers (screenshot below) I chose Build when a change is pushed to GitHub. An alternative is Poll SCM but that would increase the Jenkins workload and is not recommended for a busy build server. 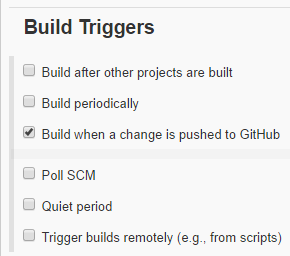 There are additional fields to specify the SCM:

A Jenkinsfile needs to be at the root of the repository. It may include one or more commands to clone/update files in the repository to the build workspace:


That’s it for configuring the Pipeline job. (For simplicity I’ve skipped configuration options unrelated to SCM and build triggers.)

The simple answer is that a Jenkinsfile may include commands to clone multiple distinct repositories. Jenkins’ response to a webhook request depends on SCM’s defined in the Jenkinsfile, not in the job configuration. Jenkins has no way of knowing these SCM’s until the Jenkinsfile has executed at least once.

Jenkins stores a job configuration as a config.xml file. Below is the XML representation of the SCM above (for any job type):

When Jenkins receives a webhook request that specifies this SCM, it will trigger a build for all Freestyle jobs whose config.xml files match the SCM (assuming those jobs are set to build when a change is pushed to GitHub).

For Pipeline jobs, Jenkins* responds to the webhook request by looking for the latest build.xml file, if any. Jenkins generates a build.xml file for every build of a job. When a Jenkinsfile is executed, every SCM referenced in the Groovy code is added to build.xml – like the XML fragment above.

At face value, Pipeline seems inconsistent with other job types. But the difference is by design, and documented:

The documentation is less explicit than I’d like, especially for those of us who tend to skim read – if they read it at all.

2 thoughts on “Gotcha with Jenkins Pipeline as Code”