Foresiight are a longtime Delphi user in Brisbane, Australia. Over the years they’ve been very successful with a Delphi-based, client server solution aimed at the Retail space. 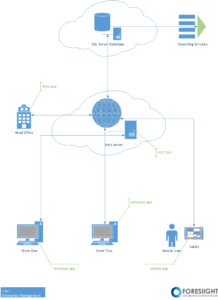 They’ve done all of this with their existing Delphi developers working on both the Delphi client and the RAD Server backend.

I caught up with Steve Williamson, Foresiight’s Development Manager, for a whiteboard session, where we discussed a wide-range of topics, including what the problem is they were trying to solve, what challenges they faced during the development, how his existing team adapted to building a REST-based server, how they worked with Angular contractors, and a whole bunch more. He also talks about how this has revitalised the existing codebase, and has enabled a heap of new functionality they are now building on top of this architecture.

I love this story, as it is not only about extending an existing Delphi application into the future, but also about a team of Delphi developers getting to work with some really cool technologies, like Azure, Angular, REST and mobile.

We’re seeing a lot of interest from ISV’s in embedding RAD Server inside their solution, so contact us if you’re interested in having a chat about it.

Subscribe to our Low Code newsletter, full of technical articles and videos curated by the Code Partners team